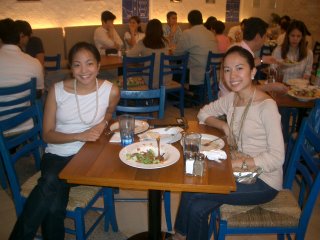 Pat and I have been really good friends (we were seatmates for a year!) since our Poveda days. Although she left for the States after High School, our communication and friendship never wained. This is because we always find time to update each other of the new and not-so-new stories of our lives. It's always a pleasant bonding experience being with a friend like her. So today was another kwentuhan day for us since she's again leaving for Spain this weekend (lucky duck?!?!). Wanting to try out something new, she recommended that we check out this greek resto Cyma Taverna in Shangri-la since it's near our area and we didn't want to go all the way to Makati. I later found out that CYMA is actually the hit restaurant in Boracay. I guess the owners found a demand here in the metro! We were lucky because we came in early for lunch otherwise we would not have gotten a table (so I suggest you either reserve or go early). Typical restaurant mall ambiance with good lighting I must say. Now let's got to the more exciting part...the food! First I want to educate those who are really familiar with Greek Food. Given the geography and history of Greece, their cuisine or style of cookery is typical of Mediterranean cuisine, with strong influences from Italy, the Middle East and, to a lesser extent, from the Balkans. Important vegetables include tomato, aubergine, potato, green beans, okra and onions. Olive oil (EVOO!), produced from the trees prominent throughout the region, adds to the distinctive taste of Greek food. Too much refinement is generally considered to be against the hearty spirit of the Greek cuisine, though recent trends among Greek culinary circles tend to favour a somewhat more refined approach. Traditionally, Greek dishes are served warm rather than hot. Okay, enough history....Back to my food encounter, Pat and I decided to split a salad and a gyro. We ordered the Cyma Chopped Salad (solo portions go for P210.00, a 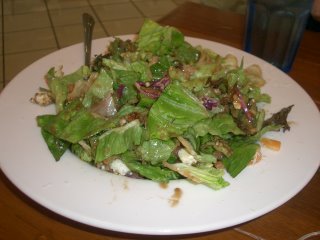 nd to share portions are P300.00), served with their special greek vinegrette, walnuts, blue cheese and pears on a bed of greens (yummy! since I looove blue cheese!). We just got the solo portion. They have big servings so the "solo" can actually serve 2 people. We didn't even finish the whole dish so that should give you an idea. We also tried their Chicken Gyro (at a very affordable P95.00 - no wonder it's a favorite!) served with potatoes and hot sauce siding. Just to add insight again, a "gyro" sandwich (pronounced YEER-oh) consists of various rotisseried meats, salad vegetables such as tomatoes, lettuce and onions, along with a yogurt-based tzatziki sauce. These ingredients are placed on a hearty form of grilled pita bread and served as a wrap sandwich. The Cyma chicken gyro was worth it - tasty, tangy and zesty rolled in one! And oh, please excuse the picture of the salad, I know it's not exactly a beauty shot because we were so excited that we tossed it already before taking the pic! And if you notice, I was not also able to take a nice shot of the gyro. We finished it before I even had the chance! hahaha! ;)
I plan to order their other signature dishes (moussaka, osso bucco and their cyma lamb chops!). Anyone care for greek? Let me know so I can tag you along!
Cyma Greek Taverna is located in the Edsa Shangri-La Mall, Cinema Level. For reservations, please call 637-3090.
Email Post
Labels: Resto Reviews