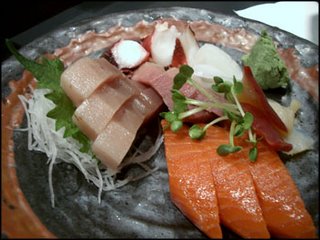 If you ask me what my top asian cuisine is (apart from Filipino that is), I would not think twice about it....It's definitely JAPANESE! Thanks to my dad who has been my biggest influence into loving this kind of cuisine, I never seem to get tired of eating sushi and sashimi. Let me tell you how this all started...I vividly remember the first time I tasted sushi was when I was in kindergarden in Montessori School inside San Lo. I hated it like anything! We had a pot luck party where we all had to bring food that we could share with our classmates. My Japanese friend brought these tiny little cakes with bright red stuffing in the middle (ofcourse that time I was completely clueless that it was tuna sushi!) neatly arranged and packed in plastic containers. She was seated beside me that time so when we were asked to put out the food we brought for sharing, I was attracted and utterly tempted by what she had to offer (compared to the same-old ensaymada I brought!). So I reached out for a small piece expecting to taste a burst of sweetness since I thought it was something for dessert but was confused with what my taste buds experienced. It was sticky, somewhat sour and fishy...Ewww! I thought to myself. Not wanting to offend my friend, I politely asked for a napkin and discreetly put out the semi-chewed piece. And that was how my hate-love (that order!) relationship with sushi and sashimi began. This experience was followed by the myriad of times my dad brought us to lunches at Sugi (as I mentioned on a previous post, this is really where my love for Jap food started). His love for jap delicacies had a great impact on how my relationship with raw fish evolved. Slowly, slowly, slowly my palate was trained to appreciate both sushi/sashimi. And now after so many years, I've actually developed an incredibly strong passion for it! Just to share my faves;
SASHIMI:

Tuna (the most basic of all) - Japanese name: maguro. A bright pink, fine textured, mildly flavored ocean fish. * I usually order the spicy tuna to give it an extra kick! Or at home we make fresh tuna salad where we mix the diced sashimi with jap mayo and wasabi! super good!

Also, I've ventured out to trying out the more "bolder" kinds. So for those who are feeling adventurous and have an intrepid palate, I suggest you try the ff;

Sea Urchin - Japanese name: uni. Inside the delicate purple and white globe of its translucent shell hides the mustard-colored blob that is the sea urchin. Somewhat pricey and only in season from August through April. The taste of this unique sea creature was once described by a sushi-lover as, "The flavors of an entire tidepool distilled into a single bite." You'll either love it...or you'll hate it, but you gotta try it at least once. Tata and I just loooove this, I think one of the main reasons I first got attracted to him was the fact that we both enjoyed this delicacy! ;) I can't imagine myself with someone who won't enjoy this with me!

Salmon Roe - Japanese name: ikura. These luscious fish eggs look like bright orange capsules that ooze their salty juices when you bite down on them.

Eel - Japanese name: unagi or anago. There are two varieties of this snake-like sea creature, freshwater or ocean-going, both of which are usually served broiled with a sweet soy glaze. It has a surprisingly mild flavor and a fine texture.

Picking up sushi with your fingers is the traditional method of eating sushi in Japan, which is perfectly acceptable, although the use of chopsticks, called ohashi, has become the preferred method for eating sushi in the U.S.

Sushi mostly comes in bite-sized pieces. However, some items on the menu are larger than others, and some sushi bars can be quite generous with their portions. Therefore, you may occasionally find yourself faced with something that won't fit comfortably in your mouth. In this event, it's okay to take a partial bite, but be forewarned that a delicate piece of sushi may fall apart in the process, causing the two-fold embarrassment of making a big mess in your shoyu dish, and the awkwardness of salvaging the remnants of the remaining bite. So, when faced with a two-bite morsel, you may want to deviate from propriety and pick up that piece with your fingers instead of using your chopsticks. You'll have much more control over its structural integrity that way. Another thing to consider is that some seafoods, such as squid, octopus, and large clams, are not easy to bite in half. With those, you'll have to bite the bullet, so to speak, and put the whole thing in your mouth at once. But if you do decide to go for the whole thing, it's not only polite, but also customary to shield your mouth from view with your free hand until you've wrestled the mega-bite into submission.

Happy Sushi eating! Beware, you can get hooked! ...just like me!

Chris said…
Hi b! I'm getting hungry na just looking at your blog. I really miss pigging out with you! Miss my cooking na noh? hehe Mishu! love you! mmwah!
5/9/06 8:11 PM