SINIGANG : The Stew That Spells Home 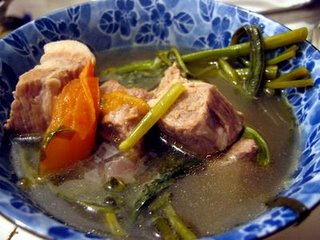 It is one Filipino treat that I don’t mind having every week. Sinigang is something that I delightfully enjoy even when I’m sick and my taste buds seem dysfunctional because everything else seems strangely bitter. I yearn for it after coming home from a long summer vacation abroad which means months of “rice-less” meals. And even during the mundane days, I request for this special stew. I believe most Filipinos will agree that sinigang can already be considered as the national stew because this basic recipe has become a staple ulam or viand in the diverse regions of the country. In fact, people of all social classes enjoy this particular dish. One can easily order this in almost all Filipino restaurants, fast food stalls or even karinderias (side street eateries) but I believe that sinigang is best eaten at the comfort of one’s home where the whole family partakes in this sumptuous meal. Not only have I enjoyed eating and drinking this soup through the years but I've likewise taken sheer pleasure from watching my very own mother stir up this amazing sour broth to perfection.

It is a simple, affordable and healthy dish which is done by first making broth from practically any type of fish, shellfish, shrimp, pork or beef. Although I must share some personal favorites which include sinigang na baboy (pork), ulo ng salmon (salmon head) and tiyan ng bangus (milkfish belly). One can also use rice washings instead of plain water for making the broth if a cloudy and somewhat thicker soup base is preferred. It does not matter what main ingredient one chooses to put because the ultimate challenge of making good sinigang lies on the delectable souring of the soup. After boiling the main ingredient of choice, the broth is now flavored and soured to its goodness by choosing from an assortment of sour leaf, fruit or flower. One can select from the diverse assortment ranging from tamarind pods which is the most common, or its leaves; kamias, santol, guavas, green mangoes or for those desperate, calamansi. According to my mother, any sour note will suffice so long as it’s not as blunt as vinegar because that would already result to another famous Filipino dish which is paksiw. My Lola from Davao even uses tomatoes to subtly give her own version of sinigang its due sourness. However, I personally like my sinigang distinctively sour, that is extra sour than usual, so I prefer the traditional tamarind pods being the most sour of all. Although nowadays, one can already pick from the wide array of ready-sinigang mixes which can pass the genuine taste of the traditional stew and would save a considerable amount of time. I must admit though that nothing beats the traditional and natural method of souring. The stew then is brought to a slow and gentle boil with intermittent stirring. Finally, the accompanying vegetables are poured in to add freshness, color and health value to the stew.

My mother uses a variety of them including kangkong, talong (eggplant), sitaw (string beans), radishes, mustard greens and ofcourse 2 my favorites okra which is sappy, slimy but truly delectable and gabi which gives a pasty, thick and rich savor to the monotonous broth. The greens are allowed to cook just for a few minutes so as not to make them wilted and soggy. And voila! The luxurious stew is ready for the taking. Alas! The culmination of it all is when I dive into the steaming sinigang using the large wooden spoon my mother used to cook it oftentimes forgetting that it is still too hot thus making my tongue feel slightly numb and burned. However, the delight I get from the first time I actually savor the wonderful sour taste makes the obtrusive pain seem unnoticeable. And after the first sip, I never fail to commend my mom for the wonderful dish! Sinigang can be served as a meal in itself or with rice. When eaten with steamed rice, the sour broth undeniably turns into the perfect ulam. When we have this dish at home, I pour myself a generous serving of the soup and gently drench my rice with the broth making it mushy just the way I like it. My meal wouldn’t be as complete without some drippings of patis (fish sauce) with gently squashed siling tagalog as my sawsawan (dipping sauce) to add a hint of saltiness and zest to the soup. True enough, whenever I experience the tickling, almost edgy, feeling of the sour soup streaming down my throat, I feel a sense of comfort, security and warmth. Home-cooked sinigang not only makes me smirk because of its sourness but it more importantly makes my heart feel peacefully at home.
Email Post
Labels: Filipino Cuisine food rave Sinigang

Blogie said…
Sinigang!!! this is my ultimate favorite Filipino dish! nothing beats it, in my opinion. the more sour the better, right? :)
too bad though that i haven't yet found the best sinigang place in davao yet...
27/1/07 9:16 PM