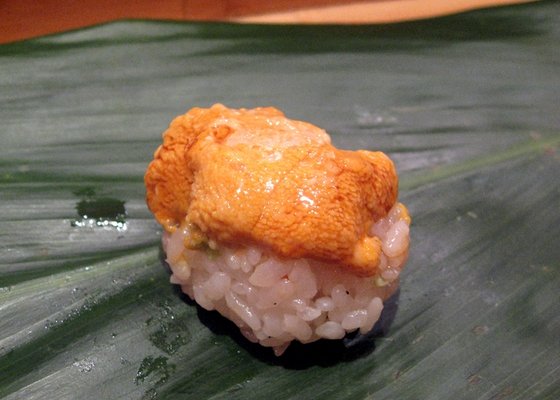 I've said this many times over but I really adore Anthony Bourdain. I'm a fan of his show and his writings. His book Kitchen Confidential solidified my choice of pursuing a culinary career and becoming a chef de cuisine. So I have a lot of gratitude towards this amazing chef/food writer/show host. I recently chanced upon a segment of his show called "Food Porn (Pornography)" where he features food that is said to be 'more than delicious'... its pure goodness makes you want to scream. It ranges from something very upscale such as caviar, uni topped with lard (yup! cured pork fat with sea urchin!) down to the simple guilty pleasure of eating street food (halal chicken rice on 53rd st). Since I am huge Japanese fanatic (one of the first ever blog entries I wrote was about Sushi and it's not surprising that I opted to work in the Morimoto Kitchen after graduating culinary school instead of somewhere French!), the thing that caught my attention the most was the feature on Sushi Yasuda in Midtown Manhattan. I watched Anthony savor each and every piece of sushi with so much passion and gusto. - Here's the link http://www.youtube.com/watch?v=1t-XVVhm-6o&feature=player_embedded (start at 2:09).


"I HAVE to eat there" I told myself. Last Thursday, I ticked it off my bucket list.

I have three letters for you...OMG!
Let me share with you why...
We had dinner reservations at 9:30 because that was the only slot left when I called. Like a child waiting for Christmas eve, I was really excited about this dinner. So I made sure we were there really early because the Japanese guy specifically said that they only hold reservations for 10 minutes. I didn't want to lose our slot. We were actually way too early, we were there 30 minutes before. But it turned out to be a good thing because I found out that we were going to be seated in a regular table when I wanted to have the Omakase at the bar. I thought I made it clear when I called that I wanted to be seated at the sushi bar! The manager said that the bar is already booked for the night and the next 3 nights as well! I was so disappointed. I told Joel, my husband, that we should just forget it if we don't get seats at the bar. That was a crucial factor to me. Not wanting to give up that easily, we used our charm and negotiating power to convince the host to consider us should there be a cancellation. I gave him the whole drama that we were going back to the Philippines in a few days and I really want to be able to eat there! He said that it would be a long shot but it wouldn't hurt to try. Anyway, the long of the short is that we got our wish! Although we didn't get the coveted corner seat where Yasuda is stationed, we still got prime seats by the bar with his sushi chefs serving us personally. I was ecstatic! 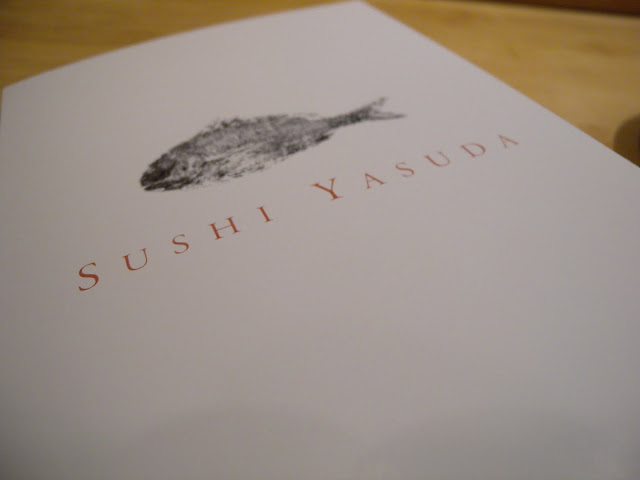 YASUDA'S PHILOSOPHY ON SUSHI RICE
Yasuda believes that the most complex part of making sushi is the rice. He believes that sushi is first about the rice then about the fish. This is Yasuda's specialty because he's been cooking sushi rice for 38 years (he mentioned this in Anthony Bourdain's interview with him that he does not delegate this task). He uses domestically grown mix of short and medium grain rice, the perfect amount of rice vinegar, japanese sea salt and a pinch of sugar. The cooking time and temperature have to be exact...like a science in itself.
THE OMAKASE EXPERIENCE 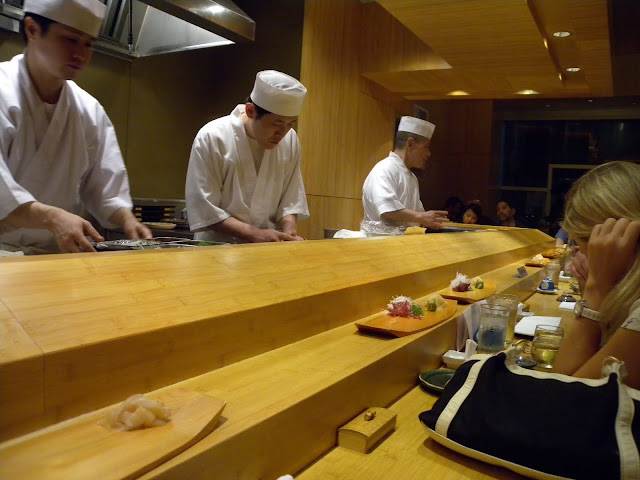 The coveted corner where Yasuda himself stands as your sushi chef and creates his masterpieces in front of you. Next time, I will specifically request to be seated at this corner! 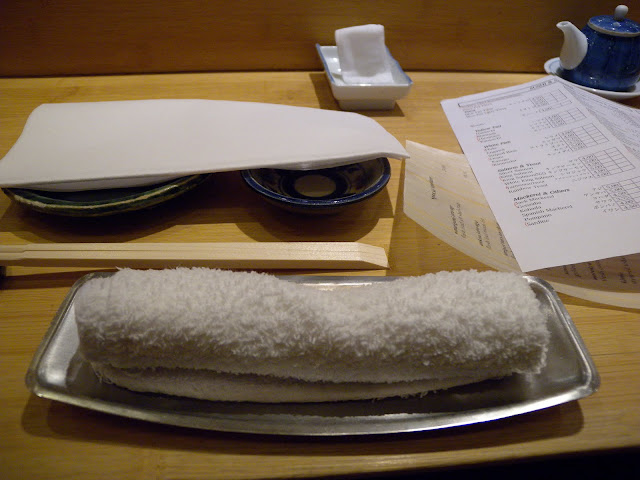 We were given a warm oshiburi (hand cloth) to begin the meal. This way, we can use our hands when eating. 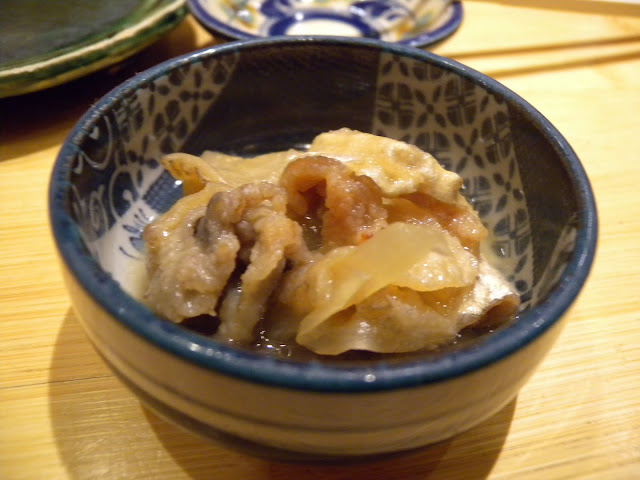 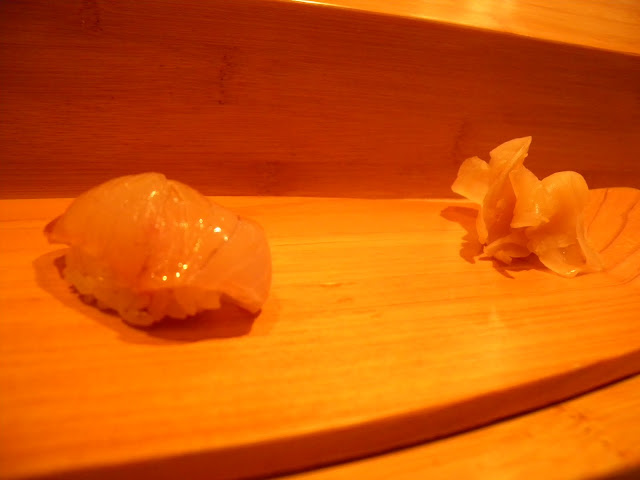 The chef asked us what fish we wanted to start our meal with and I chose Kanpachi - Hawaiian Yellowtail ($5.00)  which was glazed in shoyu. The chef said there was no need to dip it anymore. It tasted very "clean", no fishiness whatsoever, and was drizzled with a little lemon and salt! 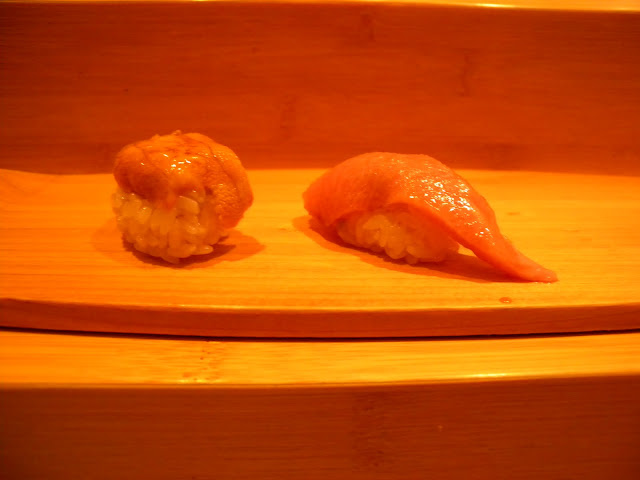 Joel and I both nibbled a piece of pickled ginger to reset our palates. A dynamic combination came next: Toro ($8) - perfectly-marbled, fatty and just melts into your mouth like butter and Uni ($5) - I always order uni sashimi whenever I eat Japanese but this was incredibly creamy, sweet and a little bit briny. Both were shoyu-glazed so we ate it straight up. The uni was nothing short of orgasmic! Yes! you heard it right! 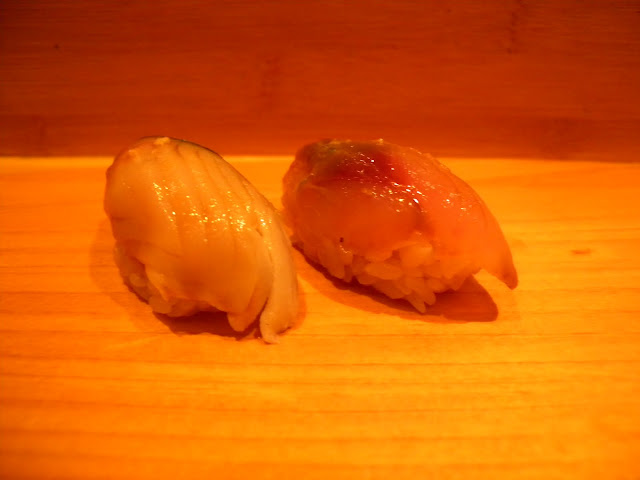 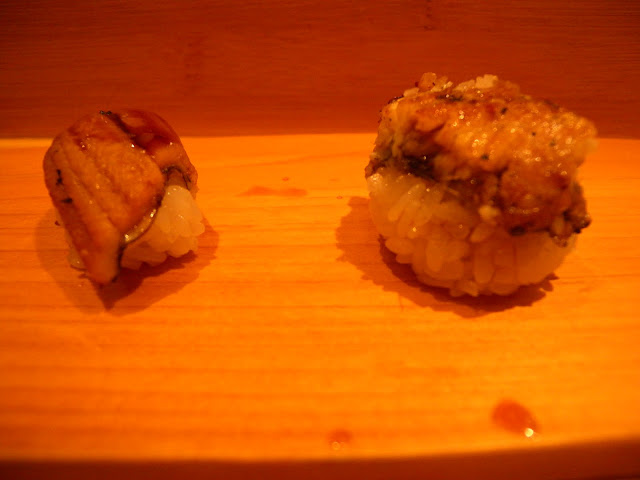 Anago -fresh dark water eel ($5.50) - This almost made Joel cry when he ate it! He said that it's one of the best things he's ever eaten in his whole life!  Shirayaki- fresh white water eel ($5.50) 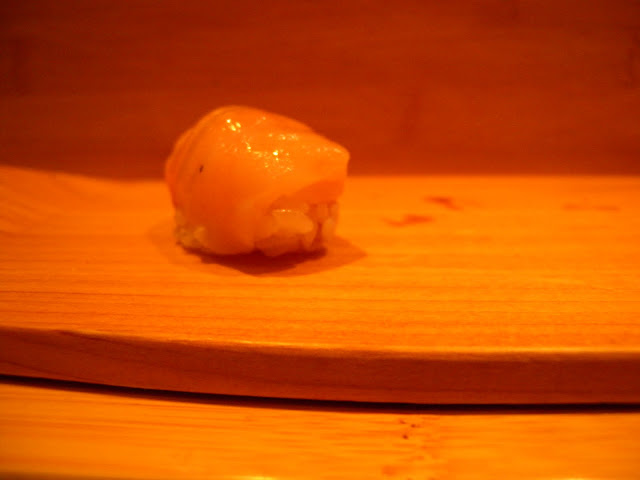 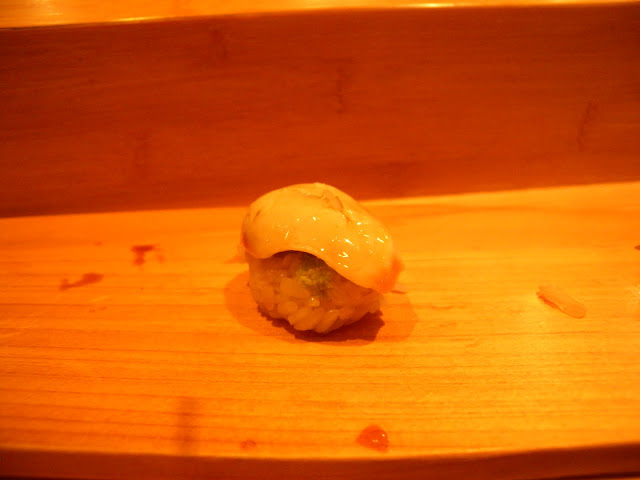 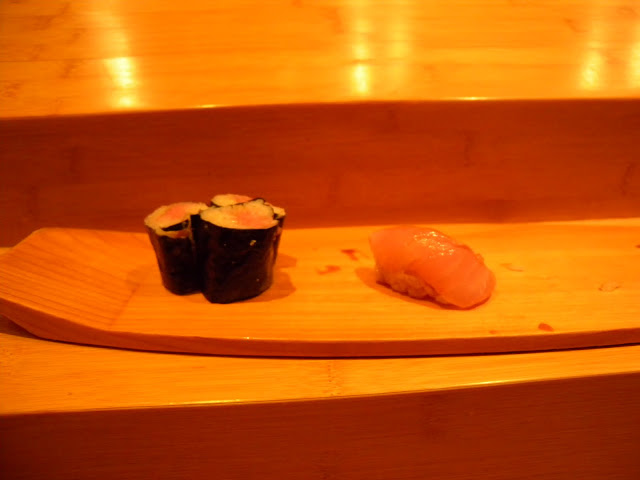 Toro Maki with scallion ($9 - 6 pcs.) and Sardine ($4.50)
After this point, Joel and I were both getting full already. We agreed that we should pick 2 of our favorites among the ones we had and have it for the second time so we would end with a bang! He chose the Anago and I opted for the Toro. We cheers our green teas before having the last bite.  Carefully we placed the tiny pieces of heaven in our mouths, closed our eyes and savored the freshness and perfection. It was explosive!
Sushi Yasuda
204 East 43rd Street
New York, New York 10017-4713
(212) 972-1001
Email Post
Labels: Japanese Japanese Cuisine New York Resto Reviews Sushi