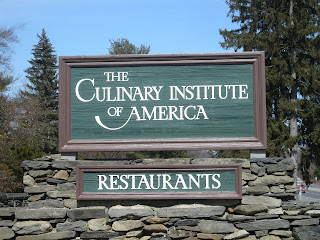 For our first wedding anniversary, my husband Joel decided to take me and our little one to the CIA campus all the way in Poughkeepsie which is about 2 hours from the city. I've been really wanting to see the campus since I was originally suppose to study there until our plans changed the last minute. CIA has a total of 6 restaurants inside the campus (American Bounty, Apple Pie Bakery, Caterina de Medici, Esoffier, St. Andrew's Cafe and Al Forno). All of which are basically student-staffed. Out of the of the 6, I chose St. Andrew's Cafe because I wanted something casual since we were with Henri. St. Andrew's Cafe focuses on the so-called "Farm to Table" Movement. It highlights locally sourced ingredients which to me was very appealing since this is one of the things I want to do when I get back home and work on our family's "farm".
Before going to the restaurant, we decided to take a tour and get some nice pictures because the weather was perfect! 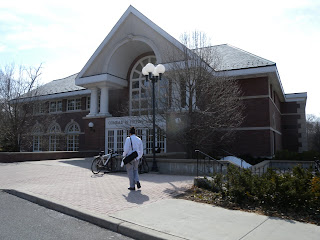 This was their Main Library 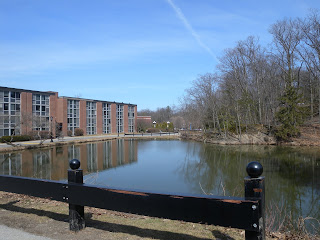 There was a lake in the middle 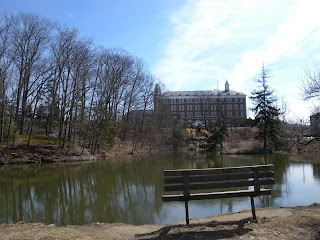 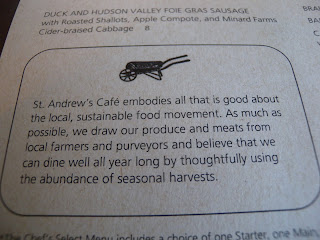 We arrived at the Cafe just in time for our 1 pm reservation after sightseeing and taking some photos. Their lunch menu was just a page and not too intimidating. I decided to order the prix fixe and Joel ordered a la carte. 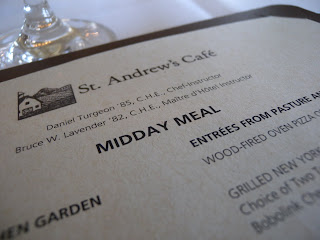 Sharing with you our meal; 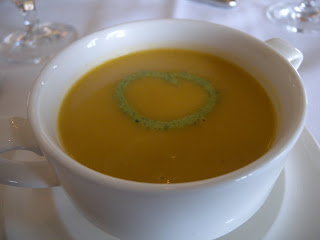 Puree of Roasted Pear, " Wonderland Farm" - Butternut Squash and Fennel Soup - this was very tasty, not too thick, and soothing. I enjoyed the texture of the three components combined. 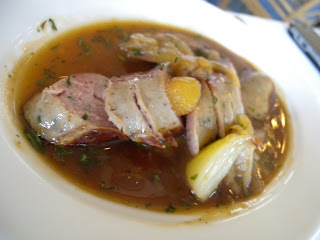 Joel tried their Duck and Hudson Valley Foei Gras Sausage with Roasted Shallots and Quinche Compote with "Minard Farms" Cider Braised Cabbage. This was a winner! You could taste the richness of the foie yet it was balanced out by the sweetness and tartness of the compote and cabbage. 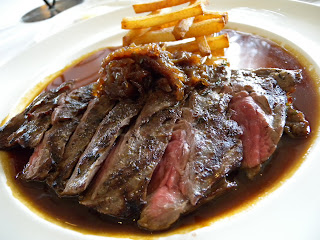 Joel's "Meiller's Farm" Hudson Valley Beef with Red Wine Jus and Pomme Frites. This was a huge disappointment because 1) the meat was chewy and not tender (but I'm guessing this had a lot to do with the actual cut of the meat. It was more like a tough hanger steak!) and 2) the pomme frites were soggy and obviously wasn't cooked right (L'eocle wouldn't serve frites like that for sure!!!) 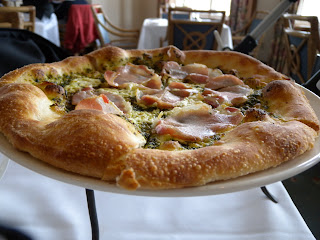 For my entree, I initially ordered the special that day which was a pork dish (I don't quite remember now) but they ran out :( So I was left with the Wood Oven Fired Pizza of the Day which was one with homemade Pesto, goat cheese and prosciutto. The crust was light, airy and crispy which was a delight! 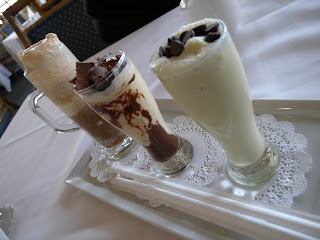 Finally it was time for dessert and Joel and I decided to share one. We chose the "Sampling of Milkshakes and Floats featuring Hudson Valley Fresh Milk" - Caramel and Chocolate Milkshake, Root Bear Float and Mint and Chocolate Chip Milkshake! It was a fun and youthful dessert experience (2 straws and alternately sipping from the cute little glasses!) - t'was the perfect way to end our "date"! 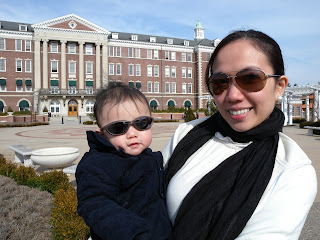