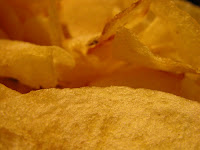 It was a hectic and rather stressful Monday for me. I had to bring Henri to his pediatrician because I thought he was showing early signs of baby asthma. I was worried and restless. I wanted to know what was wrong. Turns out, he just has some phlegm on his throat. Phew! It was such a relief to hear that everything was normal. The words "He's a healthy and happy boy" from Dr. Similon gave a smile to my face. When I got home, I had to take out my stress and eat something to calm me down. I picked out the bag of Lay's Salt & Vinegar Chips which I know has been sitting in our snack basket for quite a while now (maybe more than a month already). Well we don't really eat a lot of junk food here at home so it takes time for us to consume a bag of chips/candies/chocolates.
So just a little trivia for everyone, the potato chip was actually created here in New York by a man named George Crum in August 24, 1853. Fed up with a customer who kept on sending back his fried potatoes complaining that they were "too thick and soggy", Crum decided to slice the potatoes so thin that they could not be eaten with a fork. As they could not be fried normally in a pan, he then decided to stir-fry the slices. The guest was so impressed about the new chips that they soon became a regular item on the lodge's menu, under the name "Saratoga Chips". The potato chip remained unseasoned until the 1950's. Thanks to an Irish Crisp Company called Tayto who developed a technology to add seasoning. They produced the world's first seasoned chips, Cheese & Onion and Salt & Vinegar (which is my favorite!).
As I munched the crisp and thin salt and vinegar potato chips (although a tad bit oily!), I felt a little bit better.
I need this stuff, once in a while.
Email Post