My Obsession with Vivi (Bubble Tea!) 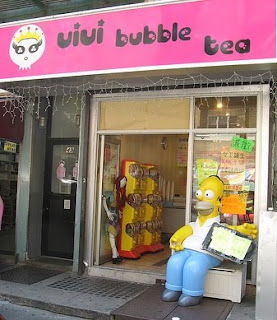 When a woman goes through pregnancy, they say she also goes through a lot of "cravings" or "paglilihi" (in tagalog). Well when I was carrying little Henri in my womb, one of the things that I got totally obsessed with aside from green mangoes (which is a very common pinoy craving...but sadly I never got the "real deal" since the green mangoes here are different and not as sour!) was Vivi Bubble Tea (Drink with Tapioca Balls/Sago). I discovered it during the first few months of my culinary program at the FCI in Soho. The school is walking distance to where it is situated....heart of crazy Chinatown .
Vivi is a very cute Japanese Tea place which you can't miss because of the life-size Homer Simpson sitting outside the predominantly pink-colored store and holding out the menu and dessert specials. Their staff (Japanese girl power!) is very friendly and efficient and the best thing about them is they give out the famous Vivi Membership VIP cards (buy 5 cups and you get the next one free!).You would have guessed that during the course of my pregnancy I was able to amass a couple of free drinks and ice cream!). The card also doubles as a menu which is pretty cool! 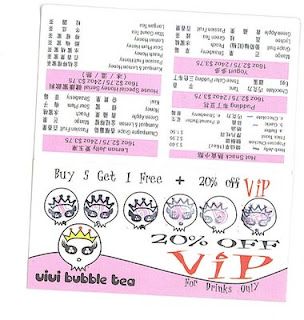 Vivi's VIP Card
They have a long list of fruit tea and shakes you can choose from plus some desserts like the jelly and red bean over ice and some Japanese snacks like the well-known takoyaki balls. Although as for me, there is only one thing...my Bubble Milk Green Tea. It's just green tea with milk and their oh-so-yummy/gummy/chewy tapioca balls! Straightforward, simple and really really good! 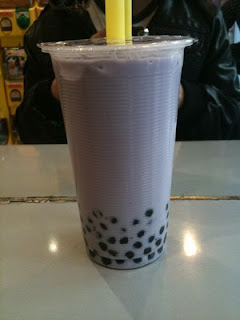